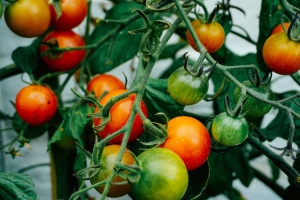 At the junction of two dirt lanes in a small village in the Ivory Coast is a little girl selling tomatoes.  She sells tomatoes and other essential items from a stall made out of tree branches, planks of wood and corrugated tin.  The stall shows signs of repair and leans to the right.  When I knew her she was about 12 years old and it is one of my biggest regrets in life that I never learned her name.

It’s my fault.  When I was living in this village, I made the conscience choice to not learn her name.  My fear was that by connecting with her at any level, even one so simple as exchanging names, then I might act on the impulse to put her in my pocket and bring her home.   The impulse was about wanting to ensure she would receive an education; to take her to a place where she would have more options in life.  Day after day I saw her and the only option I could envision for her was selling tomatoes at the junction of two dirt lanes.

Frequently her mother and her younger sister were with her in the stall.  They would talk and laugh in their language and when there weren’t customers, the girls would chase each other around the stall.  The family had an easy and comfortable way about them.  They loved and they laughed and in theory, this should be enough.  But I know better.  This is only a solid foundation.   Little girls should have more.

I knew from the start that my personal reality would prevent me from acting on impulse.  In time I would leave the village and I would not be going home.  I would be going to the next assignment, in another part of the world, where there would be more children without options.   My hope in making the choice to not learn her name was that I would avoid the feeling of heartbreak when I left.

She is fortunate in that she is with a family that loves her.  She has a sturdy if lopsided stall that has been cared for and repaired, she is able to contribute to her family’s survival and she lives in one of the most beautiful counties in the world.  It is however a country that has seen two civil wars in a ten-year period.   The village she lives in witnessed a massacre of its people and if she didn’t see the unimaginable violence of this massacre, she undoubtedly heard the noise it made and felt the fear it caused.   Much of the adult population in the Ivory Coast, particularly women, is illiterate and according to statistics, the little girl will live to be 51.

My best guess is that this little girl will sell tomatoes for the rest of her life.  Should she have daughters, she will likely teach them her profession.  It is not necessarily a bad life.  It is just a life without many choices.  Should she marry a man who treats her well and if her country finds the stability that up until now has eluded it, her life has the potential to be better than I imagine.  But then none of these choices are hers to make.

For brief moments I try to convince myself that it is better the little girl does not have many choices to make.  That she is the fortunate one for not knowing the anxiety that comes with too many choices.  These moments of foolish thinking quickly end because truth is relentless.  Not knowing is never better.  And not knowing a name does not prevent one from feeling heartbreak.