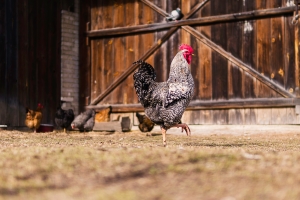 An Administrator’s job is varied and one never really knows what the day may hold.  And so it was one warm sunny afternoon in Homa Bay, Kenya when one of the items on this Administrator’s to-do list was to relocate a chicken from one expat house to another expat house.

On my way out of the office my co-worker and housemate Mamadou asked where I was going.  I explained the task at hand and Mamadou decided he could use a break and began walking with me.   Off we went in our quest; one Administrator from the United States and one Surgeon from Guinea to relocate a chicken.  You just can’t plan these kinds of things.

When we arrived at the chicken’s current place of residence we explained to the guard on duty the plan.   In was a delicate communication because the guard had been helping to take care of the chicken for some time and we wanted Otieno to know that he had done nothing wrong.   We explained that the chicken’s owner, another expat who had received the chicken as a gift from a patient, was leaving soon.  We were not entirely sure his replacement would be willing to add taking care of a chicken to the all-consuming responsibility of treating multi-drug resistant TB patients.  Mamadou and I on the other hand were both ready for the commitment.  “Ok.” Otieno said with a hint of sadness.  “We will miss her.  She is a very polite chicken.”

I don’t know what makes one chicken more polite than another.   Perhaps Otieno had gotten used to having another soul around the yard during the day.   Personally, I did not find her to be so polite.  When I casually reached out to pick her up she squawked and flapped and kicked up dirt in an effort to stay away from my grasp.   I then stood up, straightened my shirt and went in for another attempt.  The second attempt resulted in the execution of yet another evasive maneuver on the chicken’s part.

Again I stood up and this time, as I readied myself for the third attempt, I saw Otieno and Mamadou laughing at my efforts.  They weren’t even trying to hide their amusement.  What they did not know was that my only other encounter with a chicken was while on my Aunt’s farm one summer in central Alaska.  A chicken had somehow gotten into her fenced-in and moose-proof garden.  Without hesitation she went to the closet and pulled out the shotgun that was reserved for bears and trespassers.  She then took aim and fired, quickly taking down the chicken and a few innocent cabbages the chicken tried to hide behind.  She explained it to me later while we were preparing chicken and coleslaw for dinner.  It was either that or destroy the entire garden and an entire season’s worth of home grown vegetables trying to catch the chicken alive.

I went in for a third attempt and this time caught a wing.  I held on as tight as I could but could feel her slipping away.  Just as the chicken was about to make a third escape, Mamadou suddenly appeared beside me and gruffly commanded “Give her to me”.  He then swooped her up with one hand and tucked her under his arm.  Without a single squawk or flap the chicken serenely nestled under his arm.  Mamadou looked at me with disdain and said “You don’t know these things.”  He then waved goodbye to Otieno and headed home waiting briefly at the gate for me to catch up to him and the once again very polite chicken.

There it was:  the absolute truth.   “You don’t know these things.”  And when truth smashes into you the way it smashed into me that warm sunny afternoon in Homa Bay, it is bound to stick.  “Oh but Mamadou how right you are,” I thought, “there are so many things that I do not know.”

While walking home I marveled at Mamadou's proficiency with the chicken and saw him in a new light.  In his world women and children managed chickens.  But here he was, a man walking down a well-traveled dusty road in a small village in Kenya with a chicken tucked under his arm and a woman walking beside him carrying nothing.

Those we passed watched with curiosity but I hardly noticed.  The truth of Mamadou's words continued to resonate deep within me and I knew that those words would ring true forever.  And now, many years later, and every time I encounter a new experience, every time I am awed by the lessons this world has to offer, I hear Mamadou's voice reminding me “You don’t know these things.”  I now smile when I hear his words and quietly declare, knowing that somehow Mamadou can hear me, “No.  I don’t.  But I am learning.”

As we approached the chicken’s new residence and the end of our quest was in sight, I smiled up at Mamadou appreciative that he was willing to break with the roles of his culture to help me tick an important item off my to-do list.  Mamadou smiled at me with compassion, for standing before him was a woman who could not manage a chicken.