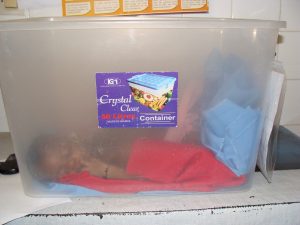 When working in the field with Doctors Without Borders, I frequently have the honor of watching sparks of imagination transform into creative realities.  What I find most remarkable is the obvious truth that the more limited the context, options, and tools … the more creative the ideas that come forth.  Having seen this truth manifest repeatedly, it occurs to me that we have it backwards.  The general assumption seems to be that there will be great strides in creativity when possibilities abound but in fact, our greatest creative endeavors come when there are significant constraints.   Necessity truly is the mother of invention.

One of my all-time favorite spark to reality moments occurred while in the Ivory Coast.  We were working in a region with a high mother and infant mortality rate.  Due to the number of premature births, Doctors Without Borders opened a neonatal unit.   The unit was located in a small, 100 square foot room in a rural hospital.  A waist-high wooden table served as a communal bed for our little patients.  Sometimes there were as many as 10 babies laid side by side on this table; each one the size of a football and wrapped up like a burrito.  The communal bed design was functional but did nothing to prevent infection control.  Babies are messy and given the close quarters and the uneven and absorbent wood the table was made out of, it was nearly impossible to keep one baby’s germs from reaching another.

The doctor in charge of the unit had a spark of an idea.  She had a simple, yet given the constraints of the context, and incredibly creative idea.  Buckets.   More precisely, bins; the same clear plastic storage bins found in nearly every garage, closet, and storage unit in the United States.   Discussions were held, people tilted their heads imagining what the proposed solution might look like, and soon, buckets were purchased.   Within weeks, there was a stack of lids in the corner and every new human arriving to the neonatal unit was placed in a bucket that served as a room of his or her own.  The bucket solution improved infection control and increased survival rates because baby fluids remained with their owners.  In the buckets, the babies could no longer share their illnesses with one another.  Add to this, the buckets were a safe way to move and rearrange babies, easy to clean and they retained heat; something every newborn craves.

I think about those beautiful babies in buckets a lot and when I watched Elizabeth Gilbert’s TED talk entitled Your Elusive Creative Genius, it hit home just how creative a solution the buckets were.  It made me realize that there truly is no limit to creativity.   Ms. Gilbert began her presentation by relating the reactions some had to the publication of her book, Eat, Pray, Love.  Incredibly, there were those who treated her as if she were doomed; as if her greatest creative endeavor was behind her.  ”Aren’t you afraid you will continue writing for the rest of your life and never again create a book that anybody in the world cares about at all?  Ever?  Again? “, more than one person asked.

How could there possibly be a limit on creativity and even worse, why would anyone suggest there is such a limit?  As an individual tangling with creativity, I am concerned.  I am concerned because individuals who believe creativity is limited can be very persuasive, especially for those of us in the midst of the struggle.  Because we struggle, because we may doubt our own genius, there is the pull to believe that perhaps creativity might well be a limited resource if only because it often feels that way.

I suppose this is why, when a creative idea sparks for me, I consider stashing it away.   I consider trying to ration my creativity.  As if I could put the idea into an account for withdrawal at a later date.  I understand this is fear-based thinking which is why I expend precious energy to push aside the fear and open my senses to the spark so I can act on the inspiration.  I have to continually remind myself that the only limits to creativity are the limits we place on it ourselves.

During those times when I do worry about running out of creative ideas and trying to stuff the ones I have under the mattress for safekeeping, I take time to remember the little burrito-wrapped footballs in buckets that have a higher chance of surviving.    I remember the truth:  that creativity is by no means a limited resource, especially when in the face of innumerable constraints.   It is in fact, when faced with constraints and boundaries that creativity really shines.   I know this to be true for there we were, in a place where too many babies were dying and then, because of one woman’s spark of imagination, babies were soon thriving in their germ-free and warm buckets.