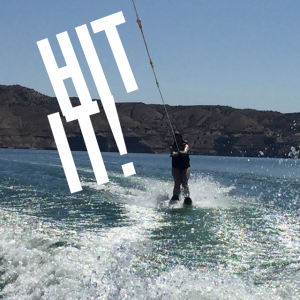 There I was one summer afternoon, in the chilly waters of Lake Wasilla, a teenager struggling to waterski.  “Hit it!” I yelled time after time.  The boat would roar forward on command, the rope connecting me to my latest challenge growing taut.  I could feel the power of the boat through the rope as it tried in vain to pull me up and on top of the water.   It would not happen that afternoon.

Mom was with me in the struggle, yelling words of advice and suggestions from the boat.  On what would be the boat’s last circle around for the day, I looked up at her from the water, shivering and expecting more advice.  Instead, she declared, “Get into the boat Catherine.   You’re just afraid of succeeding.  We’ll do it again tomorrow and you’ll be up on the first try.”  I clambered aboard, disheartened, exhausted, and perplexed by her words, “Fear of success?  Is that even possible?”

Less than 24 hours later, we were back at it.  Ignoring the cold water, I jumped in and arranged all the parts:  skis up, rope between skis, knees towards chest, body in sitting position, hands holding the bar and arms relaxed.  I focused on success and letting the boat do the work.  I took a deep breath and yelled, “Hit it!”  True to my mother’s word, I was up on the first try.

I left the water that afternoon exhausted, knowing firsthand the feeling of pure exhilaration and with the commitment to come to terms with the baffling concept that one might actually fear success.

After years of contemplation and deliberations with family, friends, and strangers, I believe I am close to grasping the concept of fearing success as well as its close relative, fear of failure.  I have seen how both fears can stop us in our tracks but in completely different ways.   Fear of failure isn’t about fear, it’s about the desire to avoid something unpleasant.  We don’t fear failure, we fear the feelings we assign to the act of failing.    Speaking for myself, these feelings are a complex combination of disappointment, frustration, embarrassment, shame, a sense of futility and the unwarranted fixation on wondering what others might think about my failures.

What I find most intriguing is that we fear failure at all.  Why do we fear something we are so familiar with?  I don’t know about you, but my entire life stands upon a solid foundation of failures, mistakes, learnings, and corrections.  It is the way of the world; we stumble as we learn to walk.  It is not reasonable to expect we will “get it” on a first attempt.

And just as fear of failure is not about failure, fear of success is not about success.  Fear of success is about fearing the unknown.  If success is defined as realizing a dream, then what we fear is what it will take to achieve that dream or what might be lurking on the other side of that dream.  More likely, we fear both.   To pursue a dream requires changes in behaviors, thoughts, and actions.  I am where I am because of the choices I have made.  If I want to be somewhere else, changes are required and making changes is exhausting.  This is why most of us do not go out of our way to find or embrace change.

As for the other side of achieving a dream; there is no telling what troll might be lying in wait.   What does happen after I successfully get up on top of the water and ski?  How much effort will be required to stay up?  How hard will it be to navigate the wake behind the boat?  How far should I go?  What will others think about my success and worse, what are the new expectations?  Success is far more complicated than failure.

Over time, I have come to see fear of failure as a practice in avoidance and fear of success as a practice in playing it safe.  Both fears then act as opposing pressures on the spirit, keeping us well within our comfort zones.  Now, when I feel the onset of either fear, my approach is to acknowledge the fear and then step around it.  I have re-named the fears as “relish in the mess” and “pursue the unknown”.  I admit, it is not a perfect system, but it does help.

A month ago I found myself once again in chilly waters, this time in the Flaming Gorge Reservoir, arranging the pieces and preparing to water ski.  Over thirty years had passed since the last time I had skied on water and I felt both fears approaching from the depths of the water.  I acknowledged them.  I heard my mother’s voice.  I made the decision to move around the fears and into the realm of being messy and pursuing the unknown.  I took a deep breath and yelled, “Hit it!”