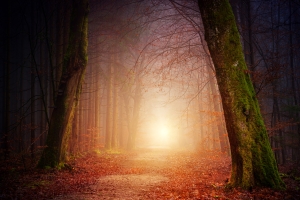 The sun was setting on the 2015 Santa Fe Wine and Chili Festival and the autumn colors in the high desert were at their peaks.  We were in line for the shuttle that would take us to the vehicles that would then take us back to our real lives.  We were dragging our feet.  We just weren’t ready for the day to end.  And in the beauty that is randomness, her little group was standing in front of our little group and we started talking.  Surrounding our conversation were views of aspen trees changing colors in one direction and in the other, a seemingly endless wave of one mountain after another.

Within moments, a connection between sisters was made.  This particular sister was a witch.  I am well aware that by writing this one powerful word, there will be those who pull back from this story and that is too bad.  They will pull back from this one word in fear because we have grown up with images of “bad” witches.  We have been conditioned to believe these are persons to be feared.  That they take people by the hand and trick them into going to scary places.  There may be those who do this but you have to know that most witches are “good”.

These good witches are women made up of beauty and clear spirit.  They are the kind of person who takes people by the hand and leads them into light and truth about the world and about themselves.  These places are scary too but in a different way.  These are scary places because these are the places where we find our great powers.  No question, discovering your powers and learning how to use them can be very scary indeed.

I like to think I knew what she was when we met because others had come before her and had shown me the scary places and I was learning about my powers.  But it doesn’t matter because frankly, if someone couldn’t see the magic swirling around her being, then they just weren’t paying attention.  By the time we boarded the shuttle we were caught up in her spell and rather than break the spell someone asked, “What are we doing next?” “Something!” she said, laughing in complete joy and opening our eyes to the infinite possibilities.

We looked at one another and without words knew that wherever she was going, we were going too.  There was just something about her.  Something that drew you into her space.  It could have been the wine, it could have the views, it could have been the spirits that have long danced on that mountain encouraging us along.  Probably it was all of those things but mostly it was because we were open to her magic.

We got off the shuttle and never made it to our vehicles.  We never even made a grab for keys.  We went first to this place so we could sit and get a good look at one another.  Find out who we were without the jostling of the shuttle or seats blocking our connections.  Then some left, full of magic.  Some stayed, wanting more.  And others joined in.  “Why did you join us?” I asked them later.  I had to know it wasn’t just me feeling what was happening.  “Because we could not resist,” he said.  It made me happy to know that they felt the magic too.

Then we went there, walking with the evening winds and tumbling through the curved streets of the old Santa Fe village.  “Do you always do this?” I asked her.  “What do you mean?” she asked.  “Do you always make magic wherever you go?”  I had to know if she was really what I thought she was.  “Every day I try to make some magic,” she said, smiling her smile of infinite possibilities.  In that moment she reminded me of the others that had come before her.  The other witches I have encountered in my life who have reminded me of the power we have to make magic whenever we so choose.

“I know there’s an open rooftop here somewhere,” someone said.   And we continued weaving in and around the streets until it was found.  But not before adding more to our group as we walked through the streets, laughing and enjoying the nothingness of it all.

For that was what it was, nothing.  Yet somehow, it was everything.  There was a complete letting go of all worries, obligations, and the very things that tied one down.  We all allowed ourselves to be swept up in that moment by someone could create the space for magic to happen.  “Catherine,” I said to myself, “Remember this feeling.  This is what magic feels like.”

It was a connection to others.  In that evening we had found one another and come together.  Like atoms dancing in and around one another.  Atoms who would never otherwise have come together if not for her magic.   All of us with our own stories, hopes, and dreams.  All of us together.  Just for that one night because such a moment could never be repeated.  Each of us letting all that we thought we were fly up to stars so we could be who we were.

My memories that magic night are deep in the bones of my feelings.   Feelings of completeness, lightness, and true happiness.   To this world that we think we know, this sister witch of ours is gone.  But we know that wherever she may be, she continues to create magic.  Inviting others into her spell, taking them by the hand and leading them into those scary yet illuminating places.  Showing some what they may have never known and showing others what they may have forgotten.

Her memory serves to remind us to never forget the capacity we have to make magic happen all around us, all the time.  To know that the impact we have on one another can be huge, even if we only know them for a spark of a moment in our lives.