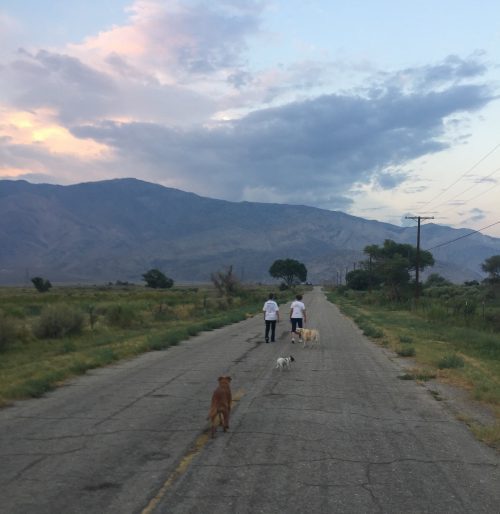 North of Lone Pine, California, past the only stoplight, the two local bars, and a bit further beyond the ice cream shop, sits the turnoff to the Old Depot Road. Tucked away and easy to miss is a battered and fading sign that reads “Narrow Gauge Road.” But nobody actually calls it that. If you see the town’s graveyard on the right, you know you’ve gone too far.

The Old Depot Road runs east and perfectly straight from Highway 395. Well, straight except for the dogleg right before the creek. Sitting at the knee of the dogleg is, you guessed it, the Old Depot. In the day, an active stop along the Carson and Colorado (C&C) Railway that served the mining communities between Nevada and California. Today the sun-bleached yellow building serves as a family dwelling.

No matter which direction you face while on the Old Deport Road, there is only beauty.  Stretching north and south for miles on either side is the Owens Valley.  Looking east are the Inyo Mountains, home to The Cerro Gordo Mine.  Looking west is the mighty Sierra Nevada with Mt Whitney, the tallest peak of them all peeking shyly from behind her smaller sister peaks.

All this makes the Old Depot Road, from the cattle guard to just before the dogleg, a nearly perfect place for Mom and her cousin Jeanne to take their almost daily walks with their dogs.   Only nearly perfect. “Too much traffic,” Jeanne sighs when the inevitable one or two vehicles drive by. Usually a resident at the depot or a camper in search of whatever it is that campers seek. “It’s as bad as the four-oh-five”, she says referring to Interstate 405 in Los Angeles just a few hours away.

Mom and Jeanne know this road better than they know their children. The Old Depot Road has bordered their family’s backyard for what is now six generations. It was along this road that they grew up. They heard the trains whistle. Family members worked and lived in the Inyo Mountains and on the railroad. This is where they learned to ride horses and later where they learned to drive.

Every step holds a story. “This is where the car races used to start.” “It was right over there where the deer jumped the fence and scared us nearly to death.”  “This small collection of graves is called the Pioneer Cemetery.  It’s been out here as long as my grandmother can remember.”  “This was where your Mom threw the rock at the truck and smashed the back window.”  “When was that?” I asked, looking over at my Mom with the, ‘ah-hum’ look.  Jeanne thought for a moment then said, “I think it was Tuesday.”

Evidently, one of the kids living at the Old Depot was driving too fast. Mom, worried for the dogs, threw a rock at his truck to slow him down. “You just have to know how to communicate with people,” Mom said blowing off the incident.  She then yelled “Over!”  Dogs and humans moved over to the side of the road making room for a truck that was slowly rolling by.  The kid, he was about 35 years old, waved at Mom and Jeanne through the broken glass. They waved back. “Free dogs!” Mom yelled, and in unison, we all moved back into the middle of the road and continued walking. “Just too much traffic,” Jeanne sighed.

If it’s not raining or “too damn cold,” Mom and Jeanie are inspirationally consistent on going on what they refer to as their “Death March.”  From time to time others will randomly join.  Maybe a daughter who moved back home, again.  Or a granddaughter on vacation from school.  Or a family member.  Or a neighbor who has nothing else better to do in the late afternoon.

As a periodic guest on these walks over the years, I have enjoyed watching the evolution of their lives and the world through their eyes. Along this road world events have unfolded, family and friends have come and gone and the passage of time is marked by the gait of the dogs.  Starting off as pups leaping shrubs and chasing rabbits in the open fields until after some years, preferring to walk at a more leisurely rate or perhaps sniff at something on the side of the road.

Important decisions are considered, reflections and insights are shared during the Death March.  Plans are made for the summer garden, tips are shared on how to manipulate Excel spreadsheets, and local politics are debated in the context of world politics and more frequently than not, it is difficult to separate the two.

And there is always the ever-riveting debate over butter vs. Crisco. A topic that pops up as a major discussion item right around the holidays. There is of course no right answer. The accord between Mom and Jeanne on the matter is that much like gender, it is a choice. And as with all choices there are consequences. And while one should not be judged for their choices, people do in fact judge.

There are also those moments during the march that only two people who love and know one another well can share: silence.   Walking together, surrounded by beauty, each in their own thoughts either remembering the past, enjoying the present, or wondering about the future.