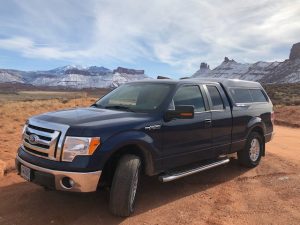 “Nice truck!” he yelled, giving me the thumbs-up. I smiled. No need to subject this unknown to the story. I’d save the telling for captive audiences. But somewhere Dad was smiling, in agreed reluctance. I did a quick head nod/eyebrow lift combo in acknowledgement of the dude and took extra special care to gracefully descend from the truck.

Agreed reluctance. Dad never liked this truck. “It’s a Ford,” he would admit, stating the most positive point of his purchase. Then would add, “But I wanted green. Why would they discontinue green of all things?” He would then look down and slowly shake his head. In the same gesture others make when they hear about pets being left in vehicles during hot summer months.

After a pause, he would continue, “And I wanted a standard transmission. They don’t even make those anymore. Can you believe that? I don’t need some motor head in Detroit telling me when to shift gears. Do you?” There really was no good response to that question. And because the pain and disappointment were evident at this point, no one ever faulted him for changing the subject. “So, tell me,” he would say, “how’d your house hold up over the winter? Pipes ok?”

To those he knew, additional grievances could be coaxed out of him. It really was unfortunate, for Ford Motor Company, that he never crossed paths with one of their motor heads. They would have learned a whole lot more about their trucks. There was something about the side mirrors, they were either too big or too small. But he did like that the indicator light blinked at the bottom of the mirrors. “Hard to forget and leave them on by accident.” And while he wanted the half cab, he wasn’t at all happy about the suicide doors. “What kind of moron designs something like this?” he would ask. Each and every time he used them. “Completely impractical.”

Recently, Dad’s brother observed, “The back seat on the half cab is just so uncomfortable.” Then he asked me, “Why didn’t he spring for the full cab?” “Well,” I said, using the same reasoning Dad gave me when I told him how uncomfortable the back seat was in the car I was about to buy.  “How often do you suppose he sat back there?”  According to my brother, when he suggested the full cab Dad’s response was a little less subtle. “Ahh … why do I need one of those?”

Myself. I find the half cab incredibly useful. Not only can I can reach the stuff I’ve casually thrown back there, even while driving, it is has also proven to be, more than once, a perfect place to take a nap. As for the suicide doors, it is impossible to close both doors while sitting in the back. You must close the doors from the front, then crawl back and over the console for your nap. Completely impractical.

Eventually Dad did come to appreciate some of the modern conveniences those motor heads put as standard in the truck. Even if he never used most of them. Like the electronic console with the automatic calculation of miles per gallon. “Interesting,” he later agreed. But still, at each fill-up he would pull out a calculator older than both his kids and a beat-up notebook to do the calculations himself.

And the cruise control. “Well look at that!” he exclaimed when my brother once engaged the cruise control while going with Dad somewhere. “In two years that has never been used. Pretty neat I guess but I never needed it.” Then he got the look in his eye and told him, “I got your cruise control right here,” and pointed at his right boot.

But things in our worlds change. And when they do, it often means that we have to change our minds about things. Like an automatic transmission. “With my bum leg I don’t know if I could have driven a standard,” Dad later confessed.  Like a complicated radio system. “I told them I didn’t want a CD player, but I sure do like listening to Johnny Cash whenever I want and not having to listen to those idiots who get paid by the word on the radio.” And even an electronic console that calculates miles per gallon, if only because it serves as a double check on calculations. “Well look at that,” he would say, “they’re right again.”

And when our world changed and Dad passed away, we also had to change our minds about the truck. It wasn’t exactly what either one of us would have chosen but it made more sense to keep it than sell it. The discussion was quick. “You want it?” my brother asked. “What am I going to do with it in the Middle East?” I asked back.

Nearly five years later, I asked my brother if I could borrow the truck for a few months. I would be doing some road tripping in the winter and everyone would feel safer if I had a 4×4. “You bet,” he said, “I’ll bring it to you.” At first, I thought he was being his typical, Best-Brother-Ever self.  But now, after driving the truck for a few months, I understand why he was so quick to turn it over. Even if only for a short time. He needed a break.

First off, it sucks gasoline at a ridiculous rate. I suppose this is why every now and then, when I look down, I see angry faces in hybrid vehicles looking up. I can read. I know what their eyes are saying. I smile back knowing not to waste my breath. They would never stand still long enough to hear the full story. Besides, I highly doubt they would appreciate that in this case Dad did get at least one thing he wanted: the larger gas tank that holds 36 (instead of 26) gallons of fuel.

Secondly, it’s a dude magnet. I know my brother doesn’t want that kind of attention and while I do, what my self-esteem doesn’t need is to compete with an inanimate object for someone’s attention. And please know, this is not my imagination about it being the truck that attracts the attention and not my uncanny skills at parallel parking the thing. My brother confirms that he too has had “some interesting, but inconclusive, conversations” with strange men.

And thirdly, it’s just not that easy driving around with all the dad memories. His sunglasses, “guaranteed to not stay on your head” still in the console. The emergency $10 bill tucked away. The keys to the camper shell in the same place they have always been. The gloves he used to fill the tank still under the driver seat.

Just the other day I flipped down the visor to block out the sun and there, in dad’s handwriting, is a reminder written on duct tape.  “Antenna 83” OAH 80””. I couldn’t remember what OAH was but I do remember Dad saying, “Pretty clever huh? Putting that there like that.” He really was quite pleased with himself for figuring out a way to keep such critical information readily available. “Pretty clever Dad,” I said in agreement, not bothering to point out that he had duct taped the cover to the mirror closed. He would never have used it anyway. And to give credit where credit is due, I took the truck to the car wash the other day where there was a sign stating that vehicle maximum height was 86”. Yes indeed, I had forgotten and had to flip down the visor to double check.

Every day being knocked over by a dad memory. Even if you know it’s coming the hit is always a surprise. And there is no other option but to go through it, to the very end. It’s exhausting. Recalling all the conversations, the lessons, the laughter, the disagreements, the reminders to “Think. Think. Think.” And the memories of the many miles that passed by while sitting in a comfortable solitude with a great man.

To Best Brother Ever, I thank you. Thank you for taking care of the truck all this time. For cleaning out the survival gear in the back and deciding what to do with the multiple sets of overalls you found, the air hoses, and rusty tools. I also don’t understand why he had three ball peen hammers back there. I’ll ask around.

I thank you for being so quick and ready to bring me the truck. I really did need it. And I now understand and better appreciate how difficult, but also heart-filling, it is to ride around with Dad all the time. To hear his voice. To recall memories and to create some new ones, as impossible as that sounds. And by the way, thanks for the reminder: OAH = “overall height”. I also understand a little better why Dad was so pleased about that one. He was being his own kind of motor head.

And as much as I appreciate all that you and the truck have given. And I do. It has been more than worth the many pennies pumped into the seemingly bottomless tank. The ride is beyond smooth. The passing of miles and comfortable solitude has been healing. The naps in the half cab were refreshing and we all know that I am in constant need of dude skill practicing. What joy to not worry if there will be enough space for stuff and downright soul lifting to drive around with a robust sound system. And yes, it goes without saying, that the cruise control is pretty neat.

My appreciation and love for you is greater than all the outdoors. For many reasons. And how I love your personal additions to the truck: the sticker of your alma mater, the granola bar that saved my life one afternoon, the GPS in the glove compartment (that I use), and the hand tied fishing flies on the dashboard. Your chef-d’œuvre of course being the rehab in the back. Serving as both a false bottom as well as a place to sleep during fishing trips. Brilliant. But do tell, how did you get the passenger side door to make the same noise as a steel ball in a pinball machine whenever I turn a corner?

Having said all that, please know that this not green, automatic transmission truck that we have all reluctantly come to love is soon on its way to be with you once again. I need a break.

Written by CC, with critical details and confirmation from Best Brother Ever.

4 thoughts on “Driving With Dad”