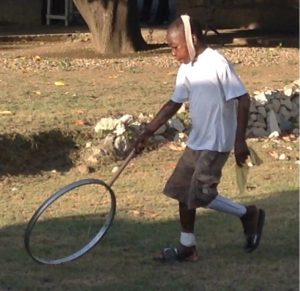 There are three miracles in this 20 second video.

The first miracle is the fact that I had the presence of mind to video the miracle before me. Usually when witnessing a miracle, the last thing I do is attempt to document it. Not because I don’t want to but because usually I don’t recognize miracles when I see them. It is not until much later, sometimes years, before I realize that what I saw was actually a miracle. This time was different. But only because I had been witnessing this particular miracle over the course of some months. This time, I knew exactly what was before me. And I happened to have a camera.

The second miracle is the fact that Olsen, the little boy in the video, can roll along uneven ground a bicycle rim using the equivalent of a coat hanger attached to a length of scrap wood. Olsen makes it look easy. But trust me, I’ve tried. It’s not easy. Anytime anyone makes anything look easy, you can pretty much bet that they have spent enormous amounts of time perfecting that thing.

The third and most astonishing miracle is the fact that six months before the video was taken, we were not sure if Olsen was going to survive.

Olsen arrived to the MSF Burn Center with his mother one afternoon. Both of them had been burned over 60% of their bodies. They had been riding on the back of a motorcycle in Port-au-Prince. A common enough means of transportation in a city of four million with minimally managed roads, traffic regulations that are rarely enforced, and bottlenecks of vehicles, vendors, and pedestrians at every intersection.

Motorcycles have the advantage of being able to weave between the stand-still traffic, bend around the lovingly decorated pick-ups that serve as public transportation, and get their customers and their customer’s stuff to their destinations a bit more quickly.  Olsen was squished between the driver and his mother. They were going somewhere with something in their arms. The driver was weaving in and out of traffic that is best observed through closed eyes when they were struck by another motorcycle. This second motorcycle was carrying a customer who was carrying a jerry can full of gasoline somewhere.

The two motorcycles ignited. Olsen’s driver walked away with minimal injuries. The second driver and the passenger with the jerrycan of gasoline died. Right there at the point of impact in the streets of Port-au-Prince. Olsen and his mother were transported to our hospital. Olsen’s mother died within hours. Olsen would spend the next six months with us, slowly, very slowly, recovering.

Recovery of any kind is a battle fought on many fronts. For Olsen there was the excruciating physical fight. But is the physical fight any more excruciating than grieving for the loss of your mother? The battles before Olsen were hard enough but life was adding the battle against fear. Fear for a future that would include scarring, loss of mobility, and very likely stigmatization from his community. And because no one is an island, there would also be the battles fought by his family and friends who were also impacted by the explosion.

It is impossible to know the magnitude of the miracle in this video without knowing Olsen’s story. But isn’t that the way with all miracles? It takes energy and effort to recognize the miracles that are all around us all the time. We are busy people who all too frequently don’t have the energy or make the effort to see what is in front of us.

To be fair, we look in the wrong places for miracles. We look for seas to part when in fact miracles are most often disguised as everyday occurrences. Our loved ones made it home from their day. My friend’s hand blender that we use to make smoothies in the morning is a miracle. I find it miraculous that there are people in this world deciding if they would rather live in a space station or on Mars. Miracles are found in the moments that close friends spend together – pay attention the next time you are with a close friend. With a shift of perspective, the common occurrence can then transform into the miracle that it truly is.

Because Olsen, rolling a tire rim with a stick and a coat hanger at an MSF staff recreation day, is absolutely a miracle.