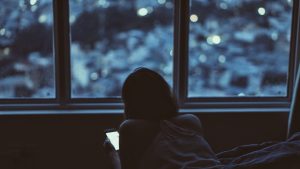 Ignoring my mother’s advice, I find myself once again in a relationship with something that can’t love me back. This relationship keeps me up at nights. We are together most of the time and when we’re not, I become frantic. We struggle for a power balance and moderation remains its elusive self. The past few months have been difficult but as with all challenges, I have learned a great deal about myself and surprisingly, have managed to hold onto a small semblance of myself.

These days I feel like the girl who has decided she’s “all in.” So what if the relationship is a bit gangly and somewhat odd looking. All judgments by others shall from this point forward be ignored as I take the leap and err on the side of commitment. I’ve invited my new and somewhat awkward relationship to Sunday dinner. It’s time for Ivan to meet family and friends.

To anyone I’ve interacted with in the past few months, I apologize for my absence when we were together. I apologize for not really paying attention while you were talking. Hopefully you didn’t say anything terribly important. Some of you noticed and asked about the wistful and distant look in my eyes. Well now you know why. Everyone, I would like to introduce you to my new phone.

What makes my relationship with Ivan difficult is that to be “all in”, I must acknowledge that I too am a mere mortal. Is this what Superman felt like when he first interacted with Kryptonite? It’s a huge let down to discover you are just one of many. In my defense, may I remind you that for the past number of years, most of my time has been spent living and working in some not so very first world environments.

Typically, when I arrived to a field assignment, my predecessor would spend a few days telling me the important things. The best time to shower, which tukal had good airflow, which staff member knew the right strings to pull, and how to restock the beer. Then, right after kissing everyone goodbye and just before slamming the door on the Landcruiser, they would hand me a Nokia and wish me well.

A Nokia “brick” they call them. A basic talk and text phone. It doesn’t even flip it’s so basic. A single charge lasts for three or more days. Drop it down a chlorinated well, no problem. Run over it with the Landcruiser, no replacement needed.  It even comes with a game: organize your contacts using only 10 characters (someone check me on this) per contact name. Special characters can be used. The brick is the phone I’ve lived with for years.

It was only between assignments when I would return to the U.S. for a quick visit and cultural update. So forgive me if I’m late to the phone party but understand. My last relationship of this type was in 2008 with a Blackberry Pearl. And while incredible indeed, the feelings I had then are nowhere near the feelings I have today. Ivan’s capacity is far greater and the adrenaline rush far more intoxicating.

I know the vast majority of you understand. During those months I walked around in a first world stupor, I saw you in the same throes of passion I find myself in today. And I admit, I judged you. There you were, sitting at a table in the restaurant. Surrounded by friends, the chips and salsa in the center of the table ignored, every single one of you staring deep into your phones. Eyes glazed over, knowing smiles playing on your lips. Quick sweeps of the hair. Then you were there, walking in a parking lot. The most dangerous place on earth and you were consumed by what was flashing on the screen. You never even heard the tires screech, did you?

I judged and would then return to remote locations that were comforting to me. To worlds where “brick” phones were issued with a kiss on both cheeks. Declining requests from staff who asked to at least have semi-intelligent phones. “Cost” and “what would the donors think” were my justifications for saying no. The horror I had seen back home clear in my mind: people leaping, head first, into their screens. Their heart rates dropping lower than Lance Armstrong’s on the flats. Thumbs moving at frantic rates to feed the beast. “So sad,” I said to righteous myself.

But recently I returned to the land of too much and as part of my commitment to stay (whatever that means) I went shopping for a phone. When I first held Ivan I was smitten. My thumbs moved on their own accord. I was sucked in and immediately understanding arrived. I understand why people no longer speak with one another. Even when standing shoulder to shoulder. My brother and I now communicate solely through an app. Do you know ‘REX’?

Now when I see a group of individuals, each one huddled over the glow of their screens and not interacting with one another, I don’t judge. I wonder, “What is it that has stolen their attention from the world around them. What is it that intrigues them so and how can I get that?” Then I pat my ass to make sure Ivan is right where he should be and move on.

But there remains one thing I don’t understand. I don’t understand why we call these things phones. It’s like referring to your home as a closet. Sure, you store a lot of stuff there but it’s so much more than that. “I don’t want to spend that much on a phone,” I hear a few holdouts lament. “It’s not a phone!” I yell back waving Ivan in their face, “It’s a super computing device that will change your life!” This thing we walk around that has more computing power than what was used to launch several space missions. And to think that we hold such power in our hands and most of our time is spent watching videos of puppies and kittens. And seriously, at what point did a terabyte of memory become “almost enough?”

So I don’t know what you call yours, but I call mine Ivan. And mom, I do love him. I hope he will be invited back for Sunday dinner. We are working on setting clear boundaries and finding where moderation might exist. Already there are times when I won’t respond when Ivan rings, jingles, or bleats for my attention. Sometimes I even keep the ringer on silent all-day long. Just because I can. I know relationships are never easy but I think Ivan may be the one. And maybe, if we really try, we will both find a way to use his powers for good.