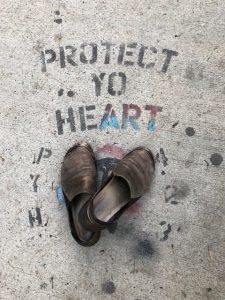 Somebody recently insulted my shoes and I must admit, it has been hard to let it go. We were gathered for some happy hours one Friday afternoon and a colleague looked down and said, “What are you wearing? Slippers?” I followed his eyes and saw my most favorite pair of shoes smiling up at me. If they had had a tail it would have been wagging. They’re always so happy to be out in the world.

In his defense I don’t believe he meant to be insulting. I think he was trying to create conversation with someone he hardly knew while also trying to stay away from the one common point they shared – work. A noble intention if lacking in execution. I can’t blame the guy. He too used to work in the fields of MSF and sometimes it can take years for our social skills to fully return.  Having said that, the sting of those words took hold.

I like to think of myself as quick on my feet. An excellent conversational sparring partner. But this time I was caught with my heart open and unprotected. I was down and out with no swing to give. I was horrified. Not a single intelligent, witty, or pithy response came to mind. Even worse was that while trying to understand what had hit me, I could feel the last remaining blocks of my esteem crumble.

It’s one of those moments you wish you could do over. If only there had been more time to train and prepare for the inevitable hit. But life doesn’t give “do-overs”. So instead I play the moment over and over in my mind. Unpacking the emotions. Wishing my DNA came with that killer instinct others seems to ooze. Thinking of all the clever things I wish I had said or done.

What I did was laugh. A defensive move that momentarily distracts your opponent while giving you time to clamber up the ropes. What I wish I had done was leave.

What I did was revert to fact. I informed him that my shoes were not slippers and attempted to explain how they came to be with me. The explanation quickly fizzled however when I realized I was justifying my choice of footwear to someone I might not recognize on a train in a few years. What I wish I had done was to ask, “Is that how you get women?”

What I did was redirect the conversation to his shoes, “What you got there?” I asked.

But now, after weeks of replay, what I wish I had done was pull him aside and say, “Have you forgotten life without a closet?” Then I would have told him all about my tail-wagging shoes.

For too long, I’ve been living out of a suitcase that under current airline regulations can weigh no more than 50 pounds. So I don’t have the wide range of shoe choice that people with a closet enjoy. Add to this the fact that beyond the first flight, I often don’t know where I am going to end up. This means packing for all seasons and all conditions.

I require shoes that will take me where I need to go. Walking through airports with easy slip on and slip off capabilities. Walking for long distances in environments ranging from ultra-urban to incredibly remote. Shoes that can be worn to meetings with foreign officials, in refugee camps that don’t have proper drainage systems, hospitals with varying standards of sanitation, and most recently, professional interviews. And for safety purposes I need shoes that will allow me to quickly find help in any kind of terrain.

The shoes he insulted … these are those shoes. They are perfect for 95% of the situations I encounter. The only thing these shoes can’t do is be worn with a dress. But that’s ok because I have a pair of sandals that can do that. Sandals that can also be worn in the shower or with my blue fuzzy socks when it is cold.

In the past two years my shoes, and my sandals for that matter, have carried me to at least eight different states in the US. We have also been to France, Northern Iraq, Lebanon, Haiti, and most recently Philippines. So yes, my shoes might be a bit worn in but they do have some incredible stories to share.

And then I would have told this guy a story or two. Because this is how you get to know people, wherever in the world you might be. In a refugee camp in Northern Iraq, in a souk in Beirut, in a hospital in Haiti, road tripping through Utah, or at a happy hour in New York City. When you want to get to know someone, you share stories.

Out with some friends a few weeks later I pointed to my shoes, “What do you think?” I asked.   “I wouldn’t wear them,” said one. I looked down at his sparkling pink sneakers and smiled. “They do look like they’ve been places,” said another who knew exactly where they had been. Her boots, who had some stories of their own to tell, were shining and without a single scuff. They then consulted with one another and came to agreement, “But Catherine, no need to change until you know what’s coming up next.” It’s different when the people who know and love you tell you the truth.

And then I would have said to the guy, “They really are incredible aren’t’ they? But tell me, where have your shoes been? What stories do they have to tell?” Because you know what … we all walk in shoes that have stories to tell.

4 thoughts on “Stories and Shoes”