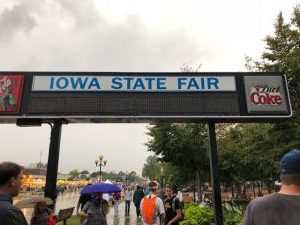 For the last 3,700 miles or so I’ve been doing a lot of musing. Which is the point of the Muses and Magic tour. To go where the muses lead and find magic. And it’s happening. I’ve seen great magic along the way and far too much beauty for a camera to capture. And I’ve fallen into conversations with people I would never have otherwise encountered.

Encounters leaving me with realizations that inevitably make the next day’s miles pass all too quickly. Conversations that have reaffirmed a belief that in our travels, wherever the muses take us, we must stop making up stories to explain the things we don’t understand. Whether about ourselves, others, or whatever has happened. When we encounter something odd. Or different. Or unusual. We immediately create a story so our brains can make sense of it all. We just can’t seem to help it.

While at the Iowa State Fair I found the perfect spot to sit and enjoy some tacos and beer. The spot was on a balcony overlooking the Grand Concourse. The main thoroughfare where if you sit long enough, every single person who goes to the fair will eventually walk or roll by. There were two seats available to choose from. One up against the back of a woman wearing bright pink. The other next to a man who seemed to be enjoying a beer and doing some people watching himself. “Is this seat taken?” I asked. “No ma’am,” he said. I sat down.

“About 30 minutes south.” And just like that my storytelling mechanism launched into gear. Here was an Iowan Farmer, likely corn and soybeans. Kids grown and out of the house. He had come to the fair with his wife to enjoy one of their few days off from their hard work. His wife was in the agricultural building just over there. She was with a friend and they were admiring the corn-on-the-cob display. They would skip The Butter Cow, this year. The line was too long and they had seen it hundreds of times before. In a few minutes, they’d return to the Food Center to be there in time for the announcement of the jam and jelly contest winners. Both of them crossing their fingers and preparing to congratulate the other should they win. In the meantime, he came here to enjoy a beer before heading off to the tractor display.

Seriously, knowing only that he was from “about 30 minutes south,” and what he looked like, I created an entire story, visuals and all. We just can’t seem to help it. But perhaps we can start to notice when we do this and then, instead of creating a story, we can use the time to ask a few questions and discover their truth.

So I can’t blame him when he began weaving his story about who I was and how I had come to be sitting next to him. And admittedly, during our short time together, I did not get curious about him. I was more curious to see what story he would create so that I made sense to him. Our conversation then became less of an exchange of information and more about me redirecting his assumptions.

“Travelling with your husband,” he began. “Nope,” I corrected, “by myself.”

“Arrived for the weekend and flying home tomorrow,” he said, taking a different route. “Nope. On a road trip,” I said.

“Family in Des Moines.” He was struggling and I wasn’t helping. “Nope. Came to see The Butter Cow.”

“Where to next?” Finally, I thought, a question, “From here I’ll turn right and head south,” I said. And to help his story along a bit I added, “Headed to Florida and since I don’t have to be anywhere until the end of October, I’m taking my time.”

“Really,” he said. And paused. I waited. As for my own story in that moment, it occurred to me to wonder if I really was such a weirdo. When I left on this road trip, I honestly didn’t think I was doing anything odd.

“Gotta be careful, a girl travelling alone ‘n all,” he said. I didn’t have the heart to tell him that violent crime in New Mexico was more than double that of Iowa. Or that I had spent time in Northern Syria and Bangui. I nodded.

“That a Fitbit?” he said pointing at my Fitbit. “Yup,” I said. I took a sip of beer and wondered where this was going.

“How wealthy are your parents?” he asked. Yowza! I thought, then calmly said, “Why do you ask?”

“Well, you got a Fitbit there. You dress nice. And you don’t work. Your parent’s must be wealthy.”

A flood of words ran through my mind and I stood back letting all possible retorts flow by, trying not to let them show on my face. I took a sip of beer, considering which ones to pluck from the flow and verbalize. The possibilities were endless and among many others, included: “Of all the stories you could come up with this is what you choose? What kind of box do you live in? You couldn’t come up with something more imaginative? And since when did ‘Fitbit’ become evidence of wealth? Could it not be evidence of someone committed to being healthy. I continued considering the possible responses.

“As for dressing nice, I’ll have you know that I’m wearing one of the same four outfits I’ve been wearing since 2016. You want to know the secret? Don’t use the dryer. And don’t you dare say anything about my shoes.

“As for not working, well, I may not be doing anything that generates revenue at the moment but let’s be clear. I take care of business. Why would you leap to the conclusion that the only way a woman can travel on her own is because she has wealthy parents? What kind of mucked up story is that? As for my parent’s financial status, which is none of your business, let’s say middle class. They worked hard and instilled some serious work values in their kids. As serious as any Iowan Farmer may have instilled in his children.”

I also considered saying nothing and walking away. Honestly, what has happened to polite conversation in this country? One does not talk about money with strangers. But, since we’re talking about money, I was mid-way through a $7 beer, one of my bigger splurges by the way, and no way was I leaving it on the table. I took another sip, then took a breath, and finally opted to say the following to him, “I know how to shop. I’m between gigs. And I have savings.”

And then honest to the gods and no joke, he then said, “Hmmph. Well. When you sat down next to me I thought you had made me your mark.” I felt my eyes widen, my eyebrows arch, and my mouth drop open. The flow of words suddenly stopped. I had nothing.

He then went on to say, “Any time a pretty girl sits next to me, I think she wants something.”

The best I could do was to say, “That’s really too bad.” I meant it. Then, to end my pain, I gave him an overview of my story. Perhaps I could add to his repertoire of stories he might tell himself in the future about women. And while one part of me was engaged in explaining, another part was reflecting on the conversation. We really do have to stop telling ourselves stories. Mostly because the stories we tell ourselves are limited by our imaginations, knowledge, and experiences. Also, if our minds are occupied making up stories about the strange things we encounter, then we’re going to miss the real story. A story that will, if we let it, lead us to new understandings of things we find might initially find odd. Or different. Or unusual.

I finished sharing my truth and took time to finish the beer. His guard lowered and he became more curious. And finally, we had a conversation going. While we talked I did what I could to stop my own story from developing. But I couldn’t help it. Here was a very nice man who couldn’t imagine that a pretty girl would sit next to him simply because it was the better of two seats. A hard-working man who lived in one of the safest places in the world and yet feared that people were out to get him. I couldn’t find a story to explain that disturbingly odd perspective. A man confused by the idea that there are women who, through their own hard work and honest means, have the resources and will to travel on their own and explore both places and ideas.

The entire encounter left me wondering how much time I may have wasted in my years creating stories to explain things I don’t understand rather than being comfortable with not understanding. Rather than being curious, inquisitive, and allowing the real story to arrive in its own sweet time.

“Well,” I said, after a bit. My plastic cup now empty. “I’m off to find the chainsaw carvers.” He knew all about them and gave both the directions and showtimes. He also told me where to find the craft beer tent and that while the view wasn’t as good, it was a good enough place as any to be when the rain started up in a few hours. As I collected my things we exchanged names and wished one another safe travels. Both of us (I hope it wasn’t just me) better humans for having spent time with someone completely different from ourselves.

We need to do more of this. Don’t you think?

1 thought on “The Stories We Tell”