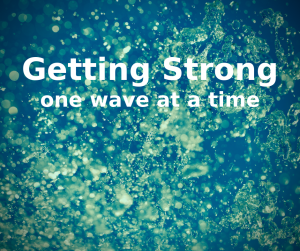 It’s hard to announce, “I’m back!” when you didn’t tell many people you were leaving. What makes it even harder is knowing that you’ll soon be leaving again. And again. So rather than saying anything, I said nothing, and left.

Then I received an email asking “where is The Mzungu Report?” I took a look and realized that it’s been almost a year since I’ve said anything. And for one who spouts that what really matters is keeping in touch with those that matter, I’m embarrassed. And this embarrassment has only further delayed communications.

I have no excuse other than — the last 12 months have been pretty epic. I was way far out there, graciously riding some particularly ginormous waves. Well, ok, graciously might be a bit of an overstatement but ginormous is not. The truth is, there were occasions when I was able to stand and feel the power of the water below, but there was a lot of flailing and flapping involved to maintain my stance for those brief moments. For a bit more truth, I was in the water a whole lot more than on the board, often being pummeled by the waves.

To my credit, I got back on the board time after time, shaking and sputtering, then paddling back out just as fast as I could to meet the next wave. It’s been quite a ride with some big ups, some big downs, and a whole lot of getting real.

While out there, I came across the photo below which pretty much captures how things have gone. And hey, if you know where I can get this print, please let me know.  I’ve searched everywhere with no luck and have no idea who to thank for summing up my life in the past twelve months so succinctly.

In case it’s a struggle to read the words, it says, “Dear God, if you’re listening, I promise if you get me out of this I’ll do whatever you want. I’ll be a better person and I’ll never ask you for anything again and I’ll even stop calling in sick when the surf is goin’ off probably, but I’m going to need an answer pretty quick.”

What the photo does not capture is all of you who were out there with me. Facing your own monstrous waves, struggling to stand, being tossed about and then, and more importantly, getting back up on your own boards, over and over again.  And let me tell you, it was incredibly comforting to have you out there with me. Even if we didn’t talk much, I knew, as I paddled out there to meet that next wave alone – because this is how life works – it never once meant that I was really alone. Funny how we can hear the cheers of those that matter over the roar of the big waters.

Thank you for your cheers because I did face some big scary waters and a few times I was seriously slammed and bruised. There were also times where I got to enjoy the floaty waters. Where I could lay down on the board and take time to recover and be reminded of all the magic that surrounds us. And rather than share with you the details of each and every wave, instead I’ll share one of the many insights I gained while far from shore, paddling from wave to wave, alongside all of you.

Cheryl Strayed speaks truth when she says, “Vulnerability is Strength,” doesn’t she? And while far from shore I learned that when we open ourselves wide open. When we allow life to tumble and roll us about. When we accept that life is more about not knowing than knowing, this is how we become super-hero like strong.

This was a tough lesson for me because as you well know, there is nothing easy about being vulnerable. But gaining our super-hero like strength requires taking “exquisite risks” and exploring life from new vantage points. It requires breaking the patterns that have brought us here so we can go where we wish to be, and doing so all while knowing that we might very well get bruised. And yet, this being vulnerable, this being ok with not knowing what’s going to happen and going anyway. This being willing to experience the big ups, the big downs and all that is in between. This is exactly what makes us strong.

For the record, I don’t mean to be Miss Pollyanna Positive and not acknowledge the big hits. Some of those waves really hurt and when that happened, I stepped up on being vulnerable and reached out for help a few times. Thank you to those who answered the call. And I know you took some pretty big spills yourself. I was watching from the floaty waters as you got slammed by some of your own big waves. I hope you heard my shouts of encouragement as you took those hits and I hope you have healed.  But as much as those hits hurt, I know that dwelling on them does us no good. We take our shots, we acknowledge them, we learn, and then we go out again and try not to make the same mistakes a second time.

Now, in the name of being vulnerable, here is what I haven’t told you. One of the reasons the past 12 months have been so epic is because I spent those months being 50 years old. My new reality is that I’m on the downward slope of this life’s curve and I’ve not been communicating because I’ve been reflecting about how I want this next half (the women in my family live a long time) to go. And here is what I’ve decided. I’m going to put into practice all those lessons and insights learned during the first half. I’m going for it. In the words of those that ride (see below), I’m going to go where “Eddie would go.”

What I ask is that you continue being there with me in the waters. Where we can be all soft and squishy and incredibly strong together. Using our super-hero strength of vulnerability to go where we wish to go. Riding the waves, being gracious as we do so, and allowing the waters to take us to places we don’t know. Sharing our insights, cheering one another on, and comforting one another when we get slammed. And always, getting back up on our boards after we tumble, then paddling out for more.

So yes, “I’m back!” and can’t wait to share more of the insights I’ve picked up along the way, hear of your experiences and insights, and discover how we, those that matter, can put it all into practice and get to where we want to be.

about “The Mzungu Report”
A very infrequent “report” that I share with people giving more details about the waves.  If you would like to be added to The Mzungu Report, send me your email directly or go to www.catherinecarr.global to do so.

about “exquisite risk”
Tara Brach has been my “go to” for years.  Her podcasts bring me perspective when I’ve needed it most. From her I learned about the “exquisite risk.”
https://www.tarabrach.com/talks-audio-video/
https://www.youtube.com/watch?v=WltYNkUtNI0

As I understand it, Tara Brach heard about this from Mark Nepo.
http://www.marknepo.com/books_theexquisite.php

about “Eddie would go”
A reference to legendary waterman Eddie Aikau, renowned for taking on waves others would shy away from.
https://www.stokedsurfschool.com/blog/2016/01/17/surfer-slang-101

3 thoughts on “Getting Strong”