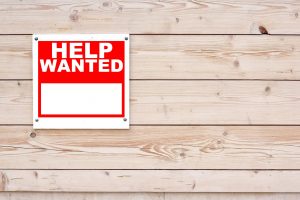 In early 2013 I was sitting at my desk, in a crowded office, in a war-torn middle eastern country I’m not allowed to name, when the HR Assistant gently laid before me a pile of torn pieces of paper with handwriting scribbled all over them. “What are these?” I asked after quickly flipping through the scraps.

“The resumes,” she said.

I looked back down at the pile. We were working in a small village where our candidate pool had recently escaped cities being bombed into fragments and were now living either in the village with family and friends or in the refugee camp down the bumpy dirt road. Access to what you and I consider as basics: computers, printers, internet, and electricity, was rare. So were jobs. But we had a number of them now open and had posted an announcement outside the hospital walls.

When the posting went up, the guards began coming to the office repeatedly to ask for pen and paper to take back downstairs with them. That was when I realized our candidate pool didn’t have access not only to the basics, but neither to the rudimentary. “No problem,” I thought, “handwritten resumes it shall be.” I gave the guards a ream of paper and a box of pens, with instructions to ask the candidates to share.

Still, I had been expecting resumes. On full-size sheets of paper, with information about personal work history and skill sets. What I wasn’t expecting were the torn squares of paper that were now on my desk. Each one a quarter the size of a full-sized sheet of paper. And each one with a name, phone number, and a statement, written in Arabic, of the person’s desire to work with Doctors Without Borders during the upcoming vaccination campaign.

“What are we supposed to do with these?” I asked, looking up at the HR Assistant, hoping she could provide some cultural guidance. But she had already left to put out another fire somewhere else.

Over the next days, more scraps of paper arrived and as they did, I pushed them into the nearest drawer, my annoyance growing with each push. The scraps of paper had become both a nuisance and a frequent reminder of the just one more tiresome chore that had to be dealt with. Just as soon as I figured out how to deal with it.

We needed the extra help and fast. The measles outbreak wasn’t going to wait for us to make sure paperwork was in good order. It raged on and continued to grow, touching more and more of its victims every day.  We needed help and the help we needed was somewhere in that heap of scraps.

If you’re thinking “applicant tracking system” and “keywords,” forget it. None of that here. The candidates would have to be triaged, in person. All of them. We decided to do it in groups of ten. From there, finalists would go to technical supervisors for selection.

The HR Assistant contacted the candidates and set up the group interviews, during which we asked them about their work history and skill sets. Forget about candidate confidentiality, we were going “Full Monty” on this one.  It was a recruitment process that was transparent like no other.  A recruitment process where candidates applied in-person for positions side by side with family members, neighbors, and quite possibly, opposing tribe members.

And you know what … it worked! Within two weeks, over 70 positions were filled, the vaccination campaign was launched, and there wasn’t a single complaint from the hundreds of applicants who had come through our doors.

I came to understand their hopes and dreams deeply, not by asking about pertinent work experience or skill sets. But by looking into their eyes.

Flash forward one year later and I’m back in the U.S., beyond burned out, and not sure what to do next with my own life. I had one foot in the world I had left and one foot “back home,” searching for something solid to stand on. How hard could it be? This is, after all, the United States.

The last time I had looked for a real job cold, I did it by answering an ad in the newspaper and sending, by mail, a resume and an inspired cover letter. That was a long time ago, and it didn’t take long to realize things had changed.

Taking a deep breath, I dove into the world of online job searching. I created a LinkedIn profile. I went to company websites and online job boards and created accounts, tracked passwords, and checked back frequently. I filled in application forms, then sent out into the ethers my own hopes and dreams, all the while feeling as if I had gone from international human resources leader to data entry specialist.

“What’s going on? Why am I not hearing back from anyone?” I asked a friend in the know.

“Applicant tracking systems,” she said. “They’re not going to work for you. The ATS doesn’t know what to do with you and your keywords. You need to use your network.”

After a year, I gave up and went back to the field. Back to worlds devastated by generations of poverty, war, and disease. Back to where things made sense.

On the days when it was so hot sweat dripped from my earlobes or when expats complained because the beverages weren’t cold enough, I’d succumb to the gravitational pull of looking for a real job and go back online. But the process only became more cumbersome. More information was requested and now, before the send button was even an option, I had to agree to the legal stuff. The choice was either agree or don’t submit at all. “Not really a choice,” I said to no one as I hit one “I Agree” button after another and thought of all those who might not have as attractive of a Plan B as I did.

Flash forward to today where I’m now standing solid with one foot “out there” and the other foot “right here” and can hear the cries of frustration from both sides. Career seekers feeling as if they’re being treated as just one more candidate. HR professionals feeling as if their organizations are being treated as just one more source of income. It’s become a soulless numbers game, on both sides.

In an age and in a region of the world where talent, computers, printers, internet, and electricity are in abundance, we have created processes where more choice is better. The more candidates we have to choose from, the better. The more resumes I send out, the better. Meanwhile, out in some remote New Mexican desert, specialized talent management software packages are processing algorithms like mad, identifying matches that are 90%. Or better.

But what we really end up with are ghosts, on both sides.

I get it. As recruiters we can’t possibly look into the eyes of all the thousands of candidates who have sent us their applications. As career seekers, we have no choice but to follow a hiring process that prioritizes keyword searches over inspiration. It’s not what anyone ever wanted, yet here we are, swiping left or right on the hopes and dreams of candidates and organizations.

Once the swiping and triage is done, finalists and recruiters are ultimately face to face with one another. Neither side clear on how the algorithm brought them together and neither side knowing one another well enough to feel safe about sharing their deepest, darkest professional secrets. Never mind sharing their hopes and dreams.

Eventually, or so I hear from a few, the chasm is crossed and strong connections are made. What I hear from most however is that career seekers are frustrated and more than one HR professional is seeking not only talent that sticks, but the spark that will re-ignite their passion for HR.

Somewhere between the scraps of paper and the bytes of data there is an answer. Getting to the answer and bringing the pendulum back to the middle however requires effort from both sides.  I vote we start by recognizing there really still is humanity in HR. Many complain that humanity left the building a while ago. I believe it’s just buried under the processes we ‘ve created. We only need to uncover it, shake it out, then gently and respectfully, lay humanity back on top of our desks.

Then for the really fun part. Let’s stop worrying about ghosting and start discussing the possibilities on how we get to a recruitment process where candidates and recruiters are matching, and making deep and lasting connections with one another, not through keywords, but through hopes and dreams.

For some excellent perspectives on this ghosting phenomenon (which is really nothing new), follow these two links.